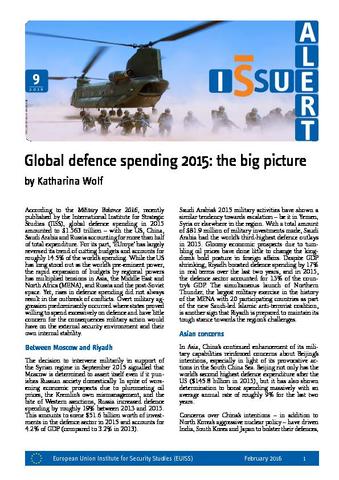 According to the Military Balance 2016, recently published by the International Institute for Strategic Studies (IISS), global defence spending in 2015 amounted to $1.563 trillion – with the US, China, Saudi Arabia and Russia accounting for more than half of total expenditure. For its part, ‘EUrope’ has largely reversed its trend of cutting budgets and accounts for roughly 14.5% of the world’s spending. While the US has long stood out as the world’s pre-eminent power, the rapid expansion of budgets by regional powers has multiplied tensions in Asia, the Middle East and North Africa (MENA), and Russia and the post-Soviet space. Yet, rises in defence spending did not always result in the outbreak of conflicts. Overt military aggression predominantly occurred where states proved willing to spend excessively on defence and have little concern for the consequences military action would have on the external security environment and their own internal stability.

Defence & technology: the US between Silicon Valley and European allies