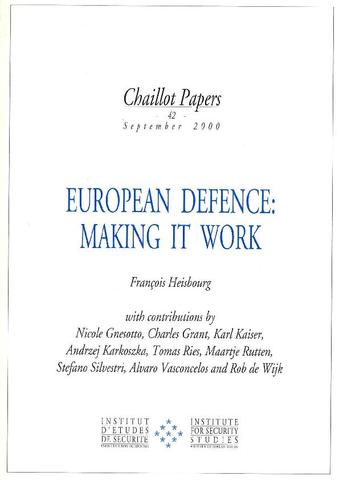 For decades, the question of European defence had the dual and somewhat strange quality of being both a necessary condition for and an obstacle to political deepening of the European Union. It was a condition because only the possession of a minimum of military means would ensure the credibility and effectiveness of any international action by the Union, something that, in French rhetoric, was often epitomised as a demand for a Europe puissance. It was an obstacle since political divergences between member states on the Union’s very legitimacy in defence matters were structural, permanent and irreconcilable, notwithstanding the skilful diplomatic discourse to which the Maastricht and Amsterdam Treaties today still bear witness. ... ... These are a few of the questions that lie behind the decision to write this paper. To answer them in as ‘European’ a way as possible, and thus to make its contribution to the development of a common strategic culture, the Institute brought together, under the leadership of François Heisbourg, who was at the time a senior visiting fellow at the Institute, a group of leading European personalities. These included directors or senior researchers at several European partner institutes: Karl Kaiser, Director of the DGAP, Berlin; Charles Grant, Director of the CER, London; Stefano Silvestri, Vice-President of the IAI, Rome; Alvaro Vasconcelos, Director of the IEEI, Lisbon; Rob de Wijk, Professor at the Royal Military Academy, Breda; Tomas Ries, Senior Researcher at the National Defence College, Helsinki; and Andrzej Karkoszka, Professor at the George C. Marshall Center, Garmisch. Two research fellows at the Institute, Antonio Missiroli but in particular Maartje Rutten, also contributed largely to this project. On the basis of the dialogue, differing points of view and the group’s common conviction that European defence is of vital importance to the future of the Union, François Heisbourg, with his customary skill, created this work. It has benefited greatly from the expertise and support of all members of the group, but the credit and responsibility for it are his alone.