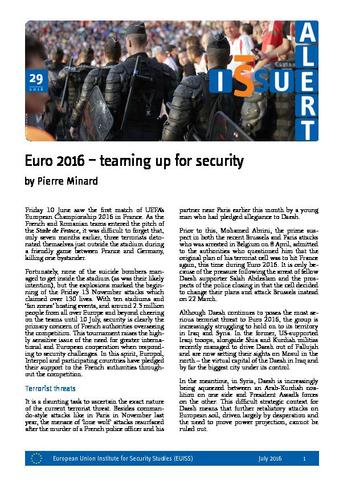 Friday 10 June saw the first match of UEFA’s European Championship 2016 in France. As the French and Romanian teams entered the pitch of the Stade de France, it was difficult to forget that, only seven months earlier, three terrorists detonated themselves just outside the stadium during a friendly game between France and Germany, killing one bystander. Fortunately, none of the suicide bombers managed to get inside the stadium (as was their likely intention), but the explosions marked the beginning of the Friday 13 November attacks which claimed over 130 lives. With ten stadiums and ‘fan zones’ hosting events, and around 2.5 million people from all over Europe and beyond cheering on the teams until 10 July, security is clearly the primary concern of French authorities overseeing the competition. This tournament raises the highly sensitive issue of the need for greater international and European cooperation when responding to security challenges. In this spirit, Europol, Interpol and participating countries have pledged their support to the French authorities throughout the competition.