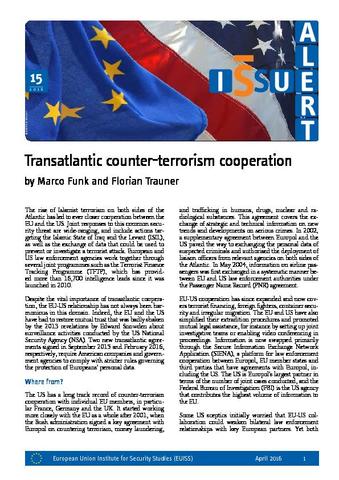 The rise of Islamist terrorism on both sides of the Atlantic has led to ever closer cooperation between the EU and the US. Joint responses to this common security threat are wide-ranging, and include actions targeting the Islamic State of Iraq and the Levant (ISIL), as well as the exchange of data that could be used to prevent or investigate a terrorist attack. European and US law enforcement agencies work together through several joint programmes such as the Terrorist Finance Tracking Programme (TFTP), which has provided more than 16,700 intelligence leads since it was launched in 2010.   Despite the vital importance of transatlantic cooperation, the EU-US relationship has not always been harmonious in this domain. Indeed, the EU and the US have had to restore mutual trust that was badly shaken by the 2013 revelations by Edward Snowden about surveillance activities conducted by the US National Security Agency (NSA). Two new transatlantic agreements signed in September 2015 and February 2016, respectively, require American companies and government agencies to comply with stricter rules governing the protection of Europeans’ personal data.