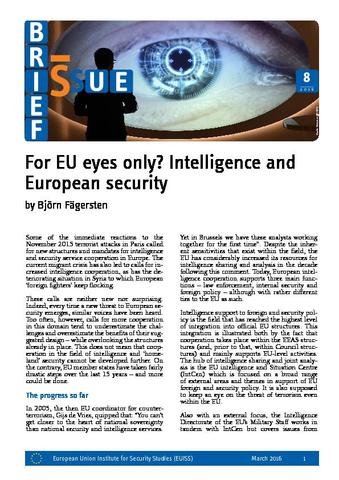 Some of the immediate reactions to the November 2015 terrorist attacks in Paris called for new structures and mandates for intelligence and security service cooperation in Europe. The current migrant crisis has also led to calls for increased intelligence cooperation, as has the deteriorating situation in Syria to which European ‘foreign fighters’ keep flocking. These calls are neither new nor surprising. Indeed, every time a new threat to European security emerges, similar voices have been heard. Too often, however, calls for more cooperation in this domain tend to underestimate the challenges and overestimate the benefits of their suggested design – while overlooking the structures already in place. This does not mean that cooperation in the field of intelligence and ‘homeland’ security cannot be developed further. On the contrary, EU member states have taken fairly drastic steps over the last 15 years – and more could be done.

New kids on the CFSP block: the JHA agencies