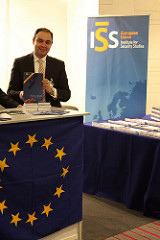 In the final week of November, a team from the EUISS travelled to Berlin in order to promote the Institute in the German capital. On 25 November, the shortened German version of the EUISS Yearbook of European Security (YES) was presented at the European Commission Representation to Germany. This event, co-organised with the ECFR, and entitled ‘Europäische Außen- und Sicherheitspolitik 2013: Zwischen Anspruch und Wirklichkeit’, brought together senior German political figures in order to debate and discuss the EU’s foreign and security policy. On 26/27 of November, EUISS representatives took part in the Berlin Security Conference 2013/12th Congress on European Security and Defence. The EUISS stand offered the members of parliament, the armed forces and security organisations attending a chance to learn more about the work of the EUISS.