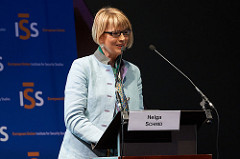 The EUISS held its annual conference on 11/12 September in central Paris. This year’s event, entitled ‘European security in a changing global environment’, was an opportunity to convene numerous policy planners and think tankers from across the Europe to discuss European security during a period of major institutional change within the Union. Three plenary and four thematic breakout sessions followed which dealt with, inter alia, the next institutional cycle of the EU, the extended southern neighbourhood and the Arab world, the operational and political challenges of CSDP, the crisis in Ukraine, and EU-Russia relations. The audience, comprised of key members of the European security community, was also treated to a guest lecture by Robert Cooper.   Concluding remarks by Pierre Vimont, Executive Secretary General of the EEAS, marked the end of a thought-provoking conference attended by more than 130 people. Summaries of the respective breakout sessions can be downloaded from the box opposite.

A reappraisal of EU capabilities

A reappraisal of EU missions and operations

A reappraisal of the eastern neighbourhood

A reappraisal of the Middle East and North Africa