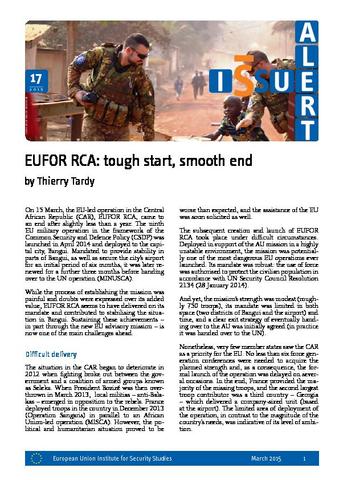 On 15 March, the EU-led operation in the Central African Republic (CAR), EUFOR RCA, came to an end after slightly less than a year. The ninth EU military operation in the framework of the Common Security and Defence Policy (CSDP) was launched in April 2014 and deployed to the capital city, Bangui.  Mandated to provide stability in parts of Bangui, as well as secure the city’s airport for an initial period of six months, it was later renewed for a further three months before handing over to the UN operation (MINUSCA).

While the process of establishing the mission was painful and doubts were expressed over its added value, EUFOR RCA seems to have delivered on its mandate and contributed to stabilising the situation in Bangui. Sustaining these achievements – in part through the new EU advisory mission – is now one of the main challenges ahead.