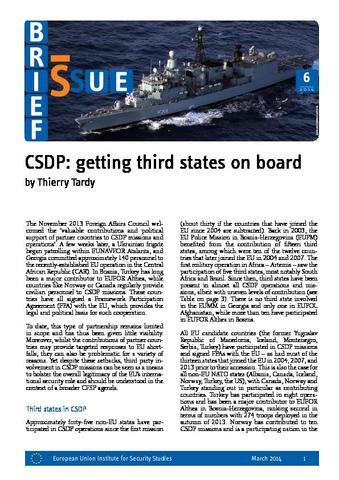 The November 2013 Foreign Affairs Council welcomed the ‘valuable contributions and political support of partner countries to CSDP missions and operations’. A few weeks later, a Ukrainian frigate began to patrol within EUNAVFOR Atalanta, and Georgia committed approximately 140 personnel to the recently-established EU operation in the Central African Republic (CAR). In Bosnia, Turkey has long been a major contributor to EUFOR Althea, while countries like Norway or Canada regularly provide civilian personnel to CSDP missions. These countries have all signed a Framework Participation Agreement (FPA) with the EU, which provides the legal and political basis for such cooperation. To date, this type of partnership remains limited in scope and has thus been given little visibility. Moreover, whilst the contributions of partner countries may provide targeted responses to EU shortfalls, they can also be problematic for a variety of reasons. Yet third party involvement in CSDP missions can be seen as a means to bolster the overall legitimacy of the EU’s international security role and should be understood in the context of a broader CFSP agenda.