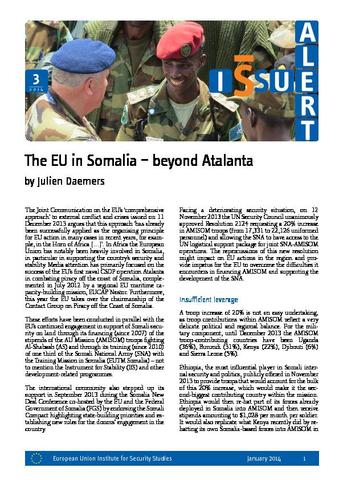 The Joint Communication on the EU’s ‘comprehensive approach’ to external conflict and crises issued on 11 December 2013 argues that this approach ‘has already been successfully applied as the organising principle for EU action in many cases in recent years, for example, in the Horn of Africa […]’. In Africa the European Union has notably been heavily involved in Somalia, in particular in supporting the country’s security and stability. Media attention has primarily focused on the success of the EU’s first naval CSDP operation Atalanta in combating piracy off the coast of Somalia, complemented in July 2012 by a regional EU maritime capacity-building mission, EUCAP Nestor. Furthermore, this year the EU takes over the chairmanship of the Contact Group on Piracy off the Coast of Somalia.

These efforts have been conducted in parallel with the EU’s continued engagement in support of Somali security on land through its financing (since 2007) of the salaries of the AU Mission (AMISOM) troops fighting Al-Shabaab (AS) and through its training (since 2010) of one third of the Somali National Army (SNA) with the Training Mission in Somalia (EUTM Somalia) – not to mention the Instrument for Stability (IfS) and other development-related programmes.

Stuck in the desert: negotiations on northern Mali