Stuck in the desert: negotiations on northern Mali 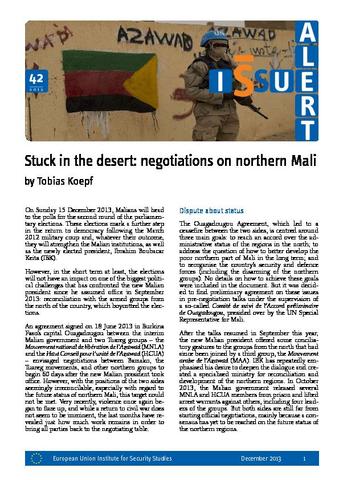 On Sunday 15 December 2013, Malians will head to the polls for the second round of the parliamentary elections. These elections mark a further step in the return to democracy following the March 2012 military coup and, whatever their outcome, they will strengthen the Malian institutions, as well as the newly elected president, Ibrahim Boubacar Keita (IBK).

However, in the short term at least, the elections will not have an impact on one of the biggest political challenges that has confronted the new Malian president since he assumed office in September 2013: reconciliation with the armed groups from the north of the country, which boycotted the elections.

Building peace in Mali: the elections and beyond