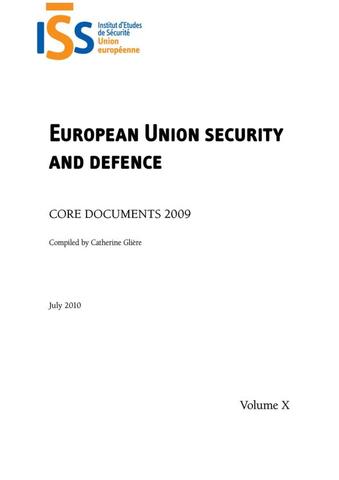 2009 marked not only the tenth anniversary of the European Security and Defence Policy (ESPD), but also the beginning of a new era with the entry into force of the Lisbon Treaty, creating a new impetus for the external action of the EU.

‘Ten years ago, ESDP was an aspiration; today, it is a reality on the ground’, Javier Solana, the High Representative for the Common Foreign and Security Policy, remarked shortly before the end of his mandate. This is amply demonstrated by the important initiatives undertaken by the Union during the past year, whether in deploying operations in Africa (the military operation EUFOR Tchad/RCA), in Afghanistan (EUPOL Afghanistan), a mission tackling piracy at sea (EU NAVFOR, the EU’s first maritime operation), or addressing the issue of capabilities through the efforts made by the European Defence Agency and by the Commission to promote synergies and complementarities.

Today Europe, through its Common Foreign and Security Policy (CFSP), makes a significant contribution to peacekeeping and international security. However, in order to be able to meet European and international expectations, the Union needs to further improve the efficiency and coherence of its external action. It is therefore vitally important to reinforce solidarity between the Member States, so that the Union can play an even more important role on the world stage in the next ten years. The entry into force of the Lisbon Treaty should allow us to optimise the instruments at our disposal, notably through the European External Action Service headed by Catherine Ashton, who on 1 December 2009 was appointed High Representative of the Union for Foreign Affairs and Security Policy.