The EU in Moldova – Settling conflicts in the neighbourhood 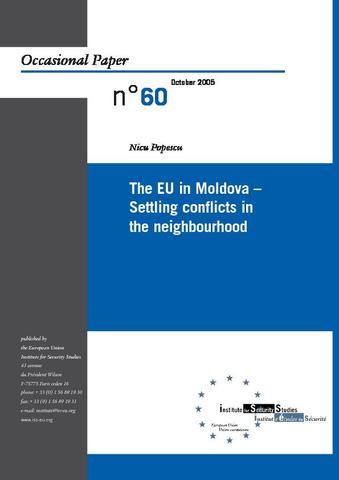 A key objective of the European Union is to have a stable, secure, prosperous and democratic neighbourhood. Failing an offer of accession to close neighbours in the medium term, the EU should and can offer stronger CFSP engagement. Contributing to conflict resolution in the neighbourhood is key to the achievement of EU objectives. However, the conflict resolution dimension of the ENP is underdeveloped. It is time for the EU to focus on the conflicts in its immediate neighbourhood.
Promoting the security aspect of ENP can start with the Transnistrian conflict in Moldova. This conflict is the closest geographically to the EU; at the same time, it is the most ‘solvable.’ The conflict features high on the agenda of EU-Russia and EU-Ukraine relations. A settlement of the conflict in Transnistria would attenuate the soft security challenges the EU faces on its eastern border. Settlement would also assuage an irritant in EU-Russia relations, and set a positive precedent in building the EU-Russia common space for external security. It would also be an example of positive cooperation with Ukraine under ENP.
The focus of EU policy should be to alter the context in which the conflict is situated and sustained, rather than hoping for an early agreement on the status of Transnistria. The primary objective should be to increase Moldova’s ‘attractiveness’ while decreasing the benefits of maintaining the current status quo. The Transnistrian separatist project is to a large degree based on false economic arguments for independence. Undermining these claims will be central to efforts to reunify the country.
The EU has already appointed an EU Special Representative for Moldova and is expected to launch an EU Border Assistance Mission to Moldova and Ukraine that would monitor the border between the two countries, including the section controlled by the secessionist authorities of Transnistria. EU border monitoring is necessary, but is not a sustainable long-term solution. The EU should help Moldova strengthen its own capacity to control the Transnistrian section of the border by launching an EU Police Mission to Moldova.
Building a sustainable context for the resolution of the conflict in Transnistria can be achieved through greater support to Moldova’s Europeanisation and implementation of the ENP Action Plan, more active support to democracy inside Transnistria and greater engagement with Ukraine under CFSP.