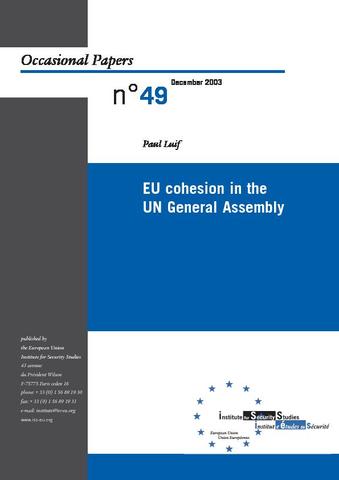 The main subject of this paper is a long-term analysis of the voting behaviour of the European Union (EU) member states in the General Assembly of the United Nations (UN). Data on voting in the General Assembly is readily available, although not always in machine-readable format. Here it is used to give a broad picture of the agreement (or lack thereof) among EU members: to what extent and on what issues, in other words, does the EU ‘speak with one voice’, and which countries belong to the EU ‘mainstream’ and which do not. This said, it has to be kept in mind that the General Assembly can only pass recommendations, not legally binding texts – its political relevance, therefore, is hardly comparable with that of the Security Council. Since late 1973 all EU members have been represented in the General Assembly, while the European Commission has long enjoyed ‘observer’ status. Therein, the EU members are part of the so-called Western European and Other States Group, which today may coordinate the votes of as many as 30 countries and is regarded as the most cohesive group and a key actor in its own right. Coordination and consultation occur mostly in New York through a heavy agenda of meetings among the representatives of the EU (and candidate) states. Only since early 2001, by contrast, do weekly meetings among those EU members that are on the Security Council and those who are not take place: they are based on Art. 19 TEU provisions and consist mostly of briefings and informal discussions between officials and/or experts. This is mainly due to the reluctance of the European permanent members (Britain and France) to see their status, prerogatives and behaviour affected by constraining EU mechanisms – a reluctance that is also reflected in Art. 19 TEU. This paper finds that identical votes by the EU states in the UN General Assembly have increased over time, in parallel with the establishment and further development of the Union’s Common Foreign and Security Policy (CFSP). However, the data show that the degree of consensus and convergence has constantly varied according to issue areas. More specifically: — on Middle East questions dealing with the Israeli-Palestinian conflict, agreement among EU members is quite high – as it is on human rights matters;
— EU member states still disagree on strategic and international security-related issues, such as disarmament in general and nuclear weapons in particular. Disagreement is even larger on ‘decolonisation’ issues, but these have declined in importance over time;
— the voting behaviour of Britain and France is different from the EU ‘mainstream’, especially on strategic matters. The ‘neutral/non-aligned’ EU countries, too, form a slightly deviating group – the exception being Finland, ever closer to the EU ‘mainstream’ since the late 1990s;
— as for the EU candidates, they have quickly adjusted to the EU positions: only Latvia (strategic/security issues) as well as Cyprus and Malta (Middle East issues) still differentiate themselves from the ‘mainstream’ EU. Turkey, too, has moved ever closer to the EU positions, but not as close as the other candidates. Finally, the overall ‘gap’ between the EU consensus and the United States has become quite large since 1979, though less so during the Clinton years. This ‘gap’ has been widest on Middle East issues (especially concerning Israel). The EU countries closest to the United States have been Britain and France, especially thanks to resolutions on nuclear weapons and strategic issues, where the three countries have displayed a fairly similar voting behaviour.

The EU and the UN: implementing effective multilateralism

Towards a UN deployment in Darfur: avoiding destabilising repercussions for peacekeeping in Africa