EU and Japan: stepping up the game 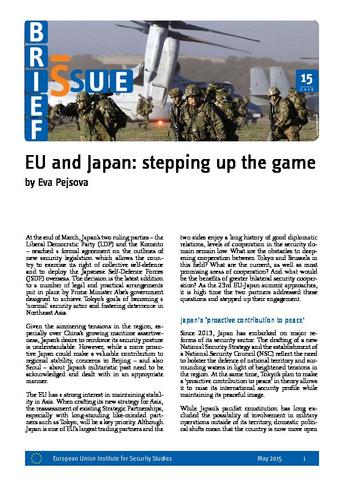 At the end of March, Japan’s two ruling parties – the Liberal Democratic Party (LDP) and the Komeito – reached a formal agreement on the outlines of new security legislation which allows the country to exercise its right of collective self-defence and to deploy the Japanese Self-Defence Forces (JSDF) overseas. The decision is the latest addition to a number of legal and practical arrangements put in place by Prime Minister Abe’s government designed to achieve Tokyo’s goals of becoming a ‘normal’ security actor and fostering deterrence in Northeast Asia. Given the simmering tensions in the region, especially over China’s growing maritime assertiveness, Japan’s desire to reinforce its security posture is understandable. However, while a more proactive Japan could make a valuable contribution to regional stability, concerns in Beijing – and also Seoul – about Japan’s militaristic past need to be acknowledged and dealt with in an appropriate manner.