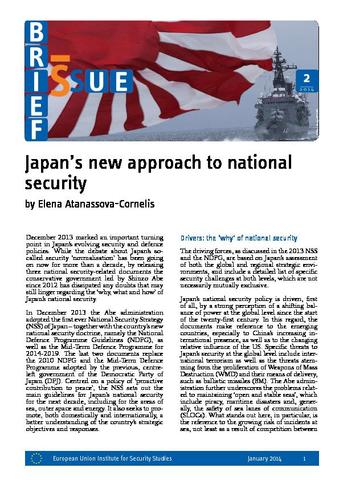 December 2013 marked an important turning point in Japan’s evolving security and defence policies. While the debate about Japan’s so-called security ‘normalisation’ has been going on now for more than a decade, by releasing three national security-related documents the conservative government led by Shinzo Abe since 2012 has dissipated any doubts that may still linger regarding the ‘why, what and how’ of Japan’s national security. In December 2013 the Abe administration adopted the first ever National Security Strategy (NSS) of Japan – together with the country’s new national security doctrine, namely the National Defence Programme Guidelines (NDPG), as well as the Mid-Term Defence Programme for 2014-2019. The last two documents replace the 2010 NDPG and the Mid-Term Defence Programme adopted by the previous, centre-left government of the Democratic Party of Japan (DPJ). Centred on a policy of ‘proactive contribution to peace’, the NSS sets out the main guidelines for Japan’s national security for the next decade, including for the areas of sea, outer space and energy. It also seeks to promote, both domestically and internationally, a better understanding of the country’s strategic objectives and responses.

The EU and Japan: making the most of each other