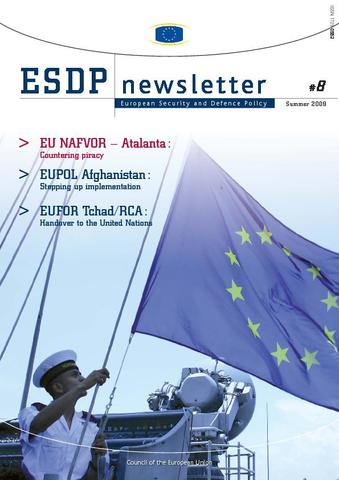 In the last year, the EU has been conducting two major military operations in and around Africa. The EU naval force – EU NAVFOR – engaged in the counterpiracy operation “Atalanta” is ongoing and it is breaking new ground since its launch in December last year. It is the EU’s first naval operation. It combines a contribution to alleviating the plight of the population of Somalia, through the provision of escorts for World Food Programme ships, with action in support of the shipping community through deterrence and repression of piracy. In an area as large as the Mediterranean, and against the back-ground of acute instability on land in Somalia, it will not single-handedly solve the problem of piracy but it is already providing, together with international partners, a tangible contribution to safer sea transit in the Gulf of Aden and the Indian Ocean. This has encouraged the EU Council to extend its mandate for another year beyond its current end date of December 2009.

EUFOR Tchad/RCA handed over to MINURCAT on 15 March, after one year during which it was able to bring a significant contribution to security in the East of Chad and the Northeast of the Central African Republic. It is now up to the UN to provide security there. But the EU is by no means turning its attention away from the region. Many member states are contributing troops to MINURCAT, and the EU is engaged in the political processes – in Chad and towards a solution of the Darfur conflict –, as well as in the provision of humanitarian and development assistance.

In a separate feature, the director of the EU Satellite Centre tells us how his teams provide these two – and other – operations with a “bird’s eye view” of their respective theatres of operations, thus offering crucial information.

We also focus on developments in the conduct of the police mission EUPOL Afghanistan. EUPOL’s activi-ties take place in the context of growing international political engagement on Afghanistan, especially with an eye on the presidential and provincial elections this August.

In this summer issue, a leading figure of the last European Parliament legislature, Karl von Wogau, takes stock of the development of ESDP from his perspective and of the involvement of his institution – through the Subcommittee for Security and Defence he chaired for the last five years –, whose support is important for the policy.

In the autumn, the next issue of the ESDP newsletter will be a special one. ESDP is 10 years old. In this decade, a lot has happened. Perhaps more than most of us would have thought in the early days. We will try to share with readers a sense of this collective endeavour, its meaning and some of the tasks that remain ahead of us.