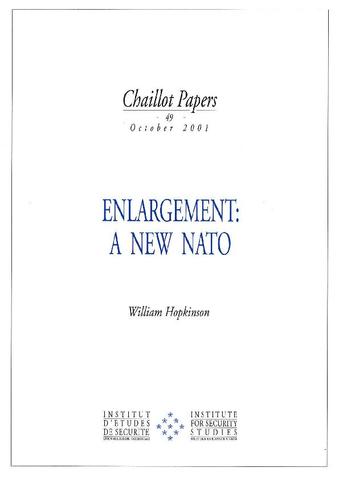 What is NATO for? The question, which some may find provocative, is none the less the essential one concerning the future of the Alliance – its legitimacy, its missions and its desirable or foreseeable geographical enlargement. Logically, the Allies should agree on the Alliance’s future role and priorities before deciding on the next enlargement – which is due to happen in May 2002. Being an essentially political issue, however, they will tackle it quite differently, enlargement often being seen as an end in itself rather than a necessary stage in adapting NATO to the post-Cold War world. That is the approach brilliantly taken in this Chaillot Paper by William Hopkinson, formerly a high-ranking British civil servant, a senior visiting fellow at the Institute in spring 2001 and one of the foremost European experts on NATO and European security in general. This paper was written before the terrorist attacks on the United States of 11 September 2001, whose true strategic impact on US policy, the Alliance and the international system in general nobody can as yet estimate. It is probable that the question of NATO enlargement will have to be rethought, in common with European security as a whole, in the light of those events. Nevertheless, the issues raised by William Hopkinson regarding the very future of NATO are no less pertinent. Although great prudence is now essential, in a global strategic context that is highly fluid, a few observations on the possible repercussions that terrorism will have can none the less be made. Following the terrorist attacks of 11 September, NATO enlargement will have to take into account two major developments: the invoking of Article 5 of the Washington Treaty, on 12 September, as an expression of transatlantic solidarity in the face of terrorism, on the one hand, and US-Russian cooperation in the fight against terrorism on the other. While it is still too soon to say exactly what impact these events will have on the future of the Alliance, certain questions have already arisen that may determine the future of NATO as well as the pace and shape of its enlargement.