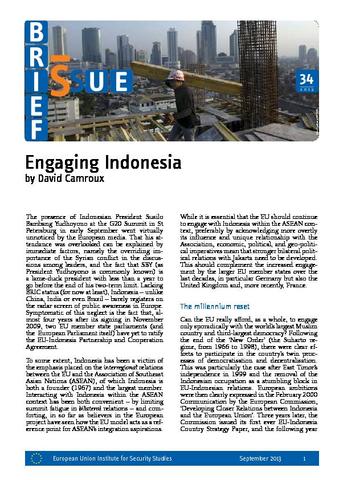 The presence of Indonesian President Susilo Bambang Yudhoyono at the G20 Summit in St Petersburg in early September went virtually unnoticed by the European media. That his attendance was overlooked can be explained by immediate factors, namely the overriding importance of the Syrian conflict in the discussions among leaders, and the fact that SBY (as President Yudhoyono is commonly known) is a lame-duck president with less than a year to go before the end of his two-term limit. Lacking BRIC status (for now at least), Indonesia – unlike China, India or even Brazil – barely registers on the radar screen of public awareness in Europe To some extent, Indonesia has been a victim of the emphasis placed on the interregional relations between the EU and the Association of Southeast Asian Nations (ASEAN), of which Indonesia is both a founder (1967) and the largest member. Interacting with Indonesia within the ASEAN context has been both convenient – by limiting summit fatigue in bilateral relations – and comforting, in so far as believers in the European project have seen how the EU model acts as a reference point for ASEAN’s integration aspirations. While it is essential that the EU should continue to engage with Indonesia within the ASEAN context, preferably by acknowledging more overtly its influence and unique relationship with the Association, economic, political, and geo-political imperatives mean that stronger bilateral political relations with Jakarta need to be developed.