Effective minilateralism for the EU – What, when and how 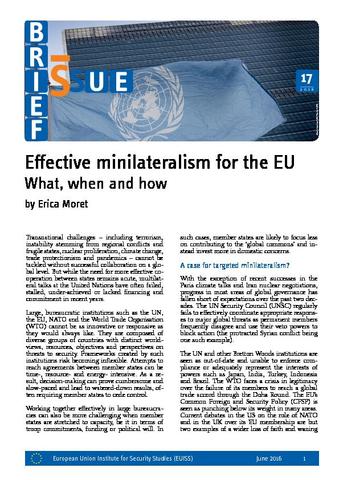 Transnational challenges – including terrorism, instability stemming from regional conflicts and fragile states, nuclear proliferation, climate change, trade protectionism and pandemics – cannot be tackled without successful collaboration on a global level. But while the need for more effective cooperation between states remains acute, multilateral talks at the United Nations have often failed, stalled, under-achieved or lacked financing and commitment in recent years.
Large, bureaucratic institutions such as the UN, the EU, NATO and the World Trade Organisation (WTO) cannot be as innovative or responsive as they would always like. They are composed of diverse groups of countries with distinct worldviews, resources, objectives and perspectives on threats to security. Frameworks created by such institutions risk becoming inflexible. Attempts to reach agreements between member states can be time-, resource- and energy- intensive. As a result, decision-making can prove cumbersome and slow-paced and lead to watered-down results, often requiring member states to cede control.