From cooperation to integration: defence and aerospace industries in Europe 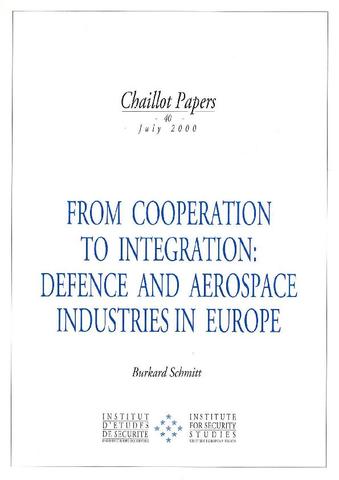 Over the last two years, two processes have considerably modified the European strategic landscape: the development of a common security and defence policy within the European Union on the one hand, and accelerated restructuring of defence industries on the other. On one side there has been political determination, at the highest level among the fifteen member countries, to make progress – which now has to be realised – and on the other a pragmatic and revolutionary bottom-up integration that the constraints of the market have now made irreversible. A priori, these two movements towards a greater Europeanisation of defence have gathered pace independently of each other, even differently, with industry and governments each following their own logic, the first in an integrationist, transnational manner, the second intergovernmentally and sovereignly. Is the logic of the market in conflict with the logic of sovereignty, or can one expect to see political upheavals in the field of European defence along the lines of what has already happened in industry? European governments admittedly sometimes do decide to drive things forward in the field of armaments: thus the decision by the United Kingdom to buy the European Meteor rather than an American missile, Germany’s decision regarding the future Airbus military transport aircraft and, rather more on the institutional front, the Letter of Intent (LoI) signed by the defence ministers of the six major arms-producing countries. However, what is novel in this twin movement towards greater Europeanisation of defence matters is undoubtedly the reversal of roles: it is no longer governments that are steering European cooperation on armaments but industry itself that is moving ahead of political constraints and adapting them, precipitating change and now acting as a driving force in the implementation of a common defence.

Between cooperation and competition: the transatlantic defence market