Between cooperation and competition: the transatlantic defence market 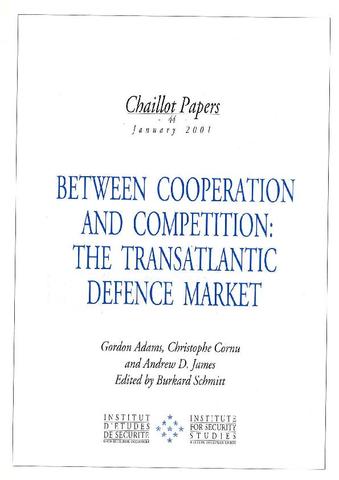 This publication examines the prospects for transatlantic cooperation in this field, and also the constraints on it. An old debate if ever there was one. How can European companies gain access to the American defence market, one of the most protected in the world? How can industrial partnerships be arranged in such a way that they do not result in either the dilution of the European groups or US monopoly in the most strategic sectors? To what extent, moreover, are these Euro-American partnerships essential for the survival and competitiveness of European defence industries? Recent political developments on both sides of the Atlantic now justify new approaches and perhaps answers: in the Union, the CESDP has an almost irreversible momentum; in the United States, the arrival in office of a new presidential team is traditionally the occasion for new directives and initiatives. What is important in Euro-American programmes is not only to fill the technological and strategic gap that is alleged to exist between American and European armed forces: most European countries do not share the Americans’ obsession with the RMA, and are not really inclined to adhere to the strategies defined by Washington for future wars. It would therefore be quite illusory to bank on transatlantic industrial cooperation as a way of making the Europeans fall in with American military strategy, even if certain Americans do so. In the same way, while transatlantic armaments cooperation may well bring benefits for Euro-American political relations as a whole, it is obvious that its true merit lies elsewhere: in the commercial advantages that could result from it for all the companies concerned.