Cold War dinosaurs or hi-tech arms providers? The West European land armaments industry at the turn of the millennium 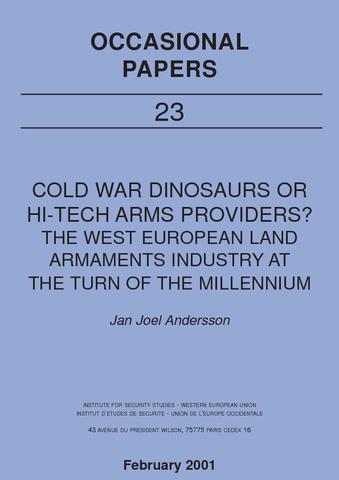 With considerable delay in comparison to aerospace and defense electronics, a restructuring process is occurring in Europe’s land armaments sector. National consolidation in the big arms producing countries is paralleled by an increasing number of transnational link-ups. Moreover, US firms have begun to participate actively in this process through acquisitions of European land system firms. In light of these events, what are the prospects for industry? In the short-term, there are still too many companies chasing too few contracts, a situation which calls for further consolidation. The new focus in Europe on smaller and lighter forces for crisis management missions has changed the conditions for the land armaments industry, with smaller volumes and fewer heavy systems being procured by governments. On export markets, European companies face increasing competition from the US, Russia, Ukraine, and Asian countries. At the same time, the growing importance of advanced technology for modern warfare means that R&D costs for new land systems drastically increased. Most land armaments producers have little, if any, turnover in civilian markets, and very few of them are associated with larger commercial groups. As a consequence, they are far more dependent on national governments than aerospace companies, for example. If there is going to be an independent and strong European land armaments sector in the future, it falls to governments to launch intergovernmental programs that can provide the necessary framework for consolidation. European governments must therefore make their strategic priorities clearer and coordinate their procurement decisions better. In the long-term, the question is whether new technological developments and operational requirements will render today’s land system firms and their products irrelevant. The key technologies for future land combat platforms lie not in metal alloys or large caliber guns, but composite materials, stealth technologies, precision guided munitions and C4ISR capabilities.Many of these technologies are not developed by traditional land armaments companies, but, for example, by electronics and shipbuilding firms. The future of land system companies will, therefore, ultimately depend on their ability to incorporate advanced technologies in the development of new products that meet the conflict needs of the future. While it is too early to write off the West European land armaments companies as Cold War dinosaurs, their role as future high-tech arms providers in the new millenium is by no means a given.