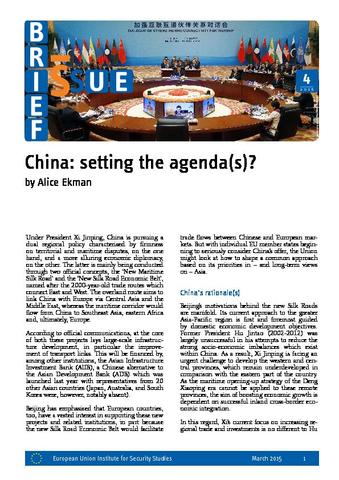 Under President Xi Jinping, China is pursuing a dual regional policy characterised by firmness on territorial and maritime disputes, on the one hand, and a more alluring economic diplomacy, on the other. The latter is mainly being conducted through two official concepts, the ‘New Maritime Silk Road’ and the ‘New Silk Road Economic Belt’, named after the 2000-year-old trade routes which connect East and West. The overland route aims to link China with Europe via Central Asia and the Middle East, whereas the maritime corridor would flow from China to Southeast Asia, eastern Africa and, ultimately, Europe. According to official communications, at the core of both these projects lays large-scale infrastructure development, in particular the improvement of transport links. This will be financed by, among other institutions, the Asian Infrastructure Investment Bank (AIIB), a Chinese alternative to the Asian Development Bank (ADB) which was launched last year with representatives from 20 other Asian countries (Japan, Australia, and South Korea were, however, notably absent). Beijing has emphasised that European countries, too, have a vested interest in supporting these new projects and related institutions, in part because the new Silk Road Economic Belt would facilitate trade flows between Chinese and European markets. But with individual EU member states beginning to seriously consider China’s offer, the Union might look at how to shape a common approach based on its priorities in – and long-term views on – Asia.