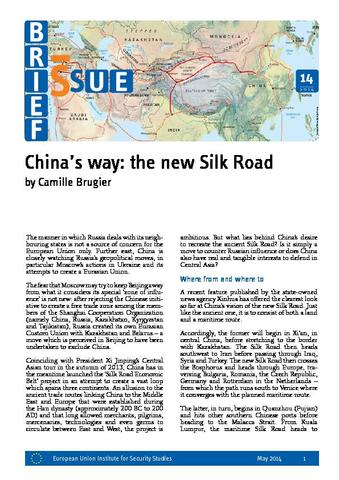 The manner in which Russia deals with its neighbouring states is not a source of concern for the European Union only. Further east, China is closely watching Russia’s geopolitical moves, in particular Moscow’s actions in Ukraine and its attempts to create a Eurasian Union. But coinciding with President Xi Jinping’s Central Asian tour in the autumn of 2013, China has in the meantime launched the ‘Silk Road Economic Belt’ project in an attempt to create a vast loop which spans three continents.An allusion to the ancient trade routes linking China to the Middle East and Europe that were established during the Han dynasty (approximately 200 BC to 200 AD) and that long allowed merchants, pilgrims, mercenaries, technologies and even germs to circulate between East and West, the project is ambitious. But what lies behind China’s desire to recreate the ancient Silk Road?

Xi Jinping and the EU

China’s energy demands: are they reshaping the world?