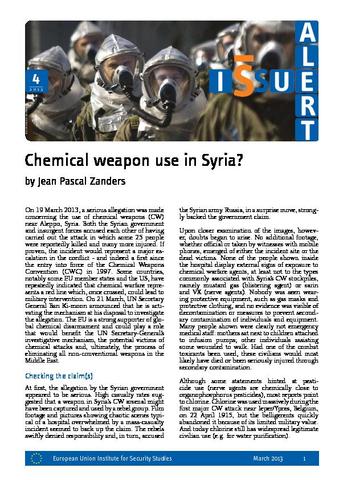 On 19 March 2013 a serious allegation was made concerning the use of chemical weapons (CW) near Aleppo, Syria. Both the Syrian government and insurgent forces accused each other of having carried out the attack in which some 25 people were reportedly killed and many more injured. If proven, the incident would represent a major escalation in the conflict - and indeed a first since the entry into force of the Chemical Weapons Convention (CWC) in 1997. Some countries, notably some EU member states and the US, have repeatedly indicated that chemical warfare represents a red line which, once crossed, could lead to military intervention.

On 21 March, UN Secretary General Ban Ki-moon announced that he is activating the mechanism at his disposal to investigate the allegation. The EU is a strong supporter of global chemical disarmament and could play a role that would benefit the UN Secretary-General’s investigative mechanism, the potential victims of chemical attacks and, ultimately, the process of eliminating all non-conventional weapons in the Middle East.