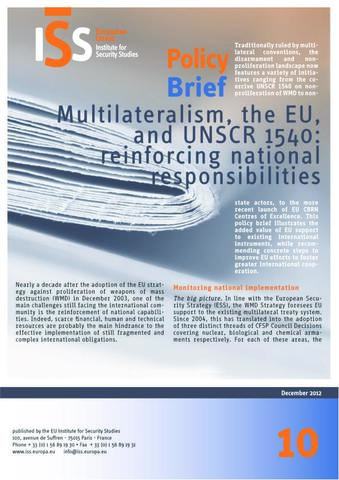 Nearly a decade after the adoption of the EU strategy against proliferation of weapons of mass destruction (WMD) in December 2003, one of the main challenges still facing the international community is the reinforcement of national capabilities. Indeed, scarce financial, human and technical resources are probably the main hindrance to the effective implementation of still fragmented and complex international obligations. Not only are the EU and its member states abiding by their international obligations in this domain, but they have also supported national implementation by third countries within the agreed multilateral framework. In line with the European Security Strategy (ESS), the WMD Strategy foresees EU support to the existing multilateral treaty system. Since 2004, this has translated into the adoption of three distinct threads of CFSP Council Decisions covering nuclear, biological, and chemical armaments respectively. For each of these areas, the EU identifies existing overlaps between its own strategic objectives on the one hand, and the activities of the International Atomic Energy Agency (IAEA), the Biological and Toxin Weapons Convention Implementation Support Unit (BTWC-ISU), and the Organisation for the Prohibition of Chemical Weapons (OPCW) on the other, in order to ensure political synergy.

Setting a standard for stakeholdership

Future of the Chemical Weapons Convention: transitioning towards the post-destruction phase