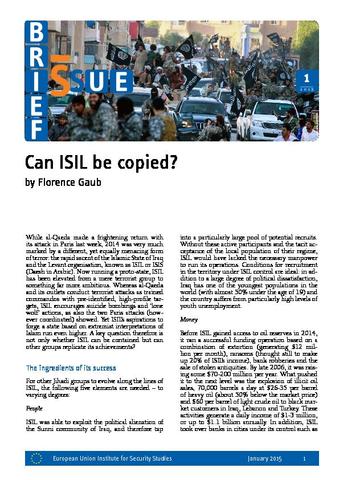 While al-Qaeda made a frightening return with its attack in Paris last week, 2014 was very much marked by a different, yet equally menacing form of terror: the rapid ascent of the Islamic State of Iraq and the Levant organisation, known as ISIL or ISIS (Daesh in Arabic). Now running a proto-state, ISIL has been elevated from a mere terrorist group to something far more ambitious. Whereas al-Qaeda and its outlets conduct terrorist attacks as trained commandos with pre-identified, high-profile targets, ISIL encourages suicide bombings and ‘lone wolf’ actions, as also the two Paris attacks (however coordinated) showed.

Yet ISIL’s aspirations to forge a state based on extremist interpretations of Islam run even higher. A key question therefore is not only whether ISIL can be contained but can other groups replicate its achievements?

An Arab Army – coming at last?