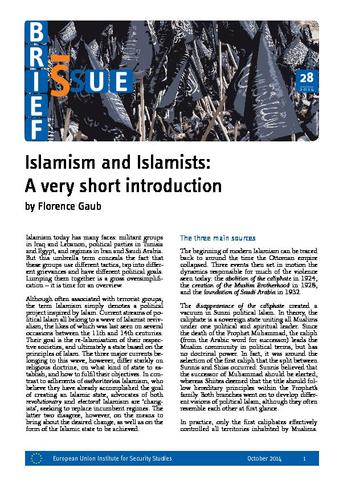 Islamism today has many faces: militant groups in Iraq and Lebanon, political parties in Tunisia and Egypt, and regimes in Iran and Saudi Arabia. But this umbrella term conceals the fact that these groups use different tactics, tap into different grievances and have different political goals. Lumping them together is a gross oversimplification – it is time for an overview. Although often associated with terrorist groups, the term Islamism simply denotes a political project inspired by Islam. Current streams of political Islam all belong to a wave of Islamist revivalism, the likes of which was last seen on several occasions between the 11th and 14th centuries. Their goal is the re-Islamisation of their respective societies, and ultimately a state based on the principles of Islam. The three major currents belonging to this wave, however, differ starkly on religious doctrine, on what kind of state to establish, and how to fulfil their objectives. In contrast to adherents of In contrast to adherents of authoritarian Islamism, who believe they have already accomplished the goal of creating an Islamic state, revolutionary and electoral Islamism are ‘changists’, seeking to replace incumbent regimes. The latter two disagree, however, on the means to bring about the desired change, as well as on the form of the Islamic state to be achieved.