An Arab Army – coming at last? 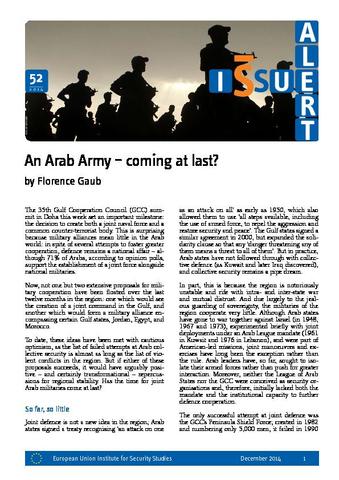 The 35th Gulf Cooperation Council (GCC) summit in Doha this week set an important milestone: the decision to create both a joint naval force and a common counter-terrorist body. This is surprising because military alliances mean little in the Arab world: in spite of several attempts to foster greater cooperation, defence remains a national affair – although 71% of Arabs, according to opinion polls, support the establishment of a joint force alongside national militaries.

Now, not one but two extensive proposals for military cooperation have been floated over the last twelve months in the Gulf: one which would see the creation of a joint command in the Gulf, and another which would form a military alliance encompassing certain Gulf states, Jordan, Egypt, and Morocco. So far, these ideas have been met with cautious optimism, as the list of failed attempts at Arab collective security is almost as long as the list of violent conflicts in the region. But if either of these proposals succeeds, it would have arguably positive – and certainly transformational – repercussions for regional stability. Has the time for joint Arab militaries come at last?