Building peace in Mali: the elections and beyond 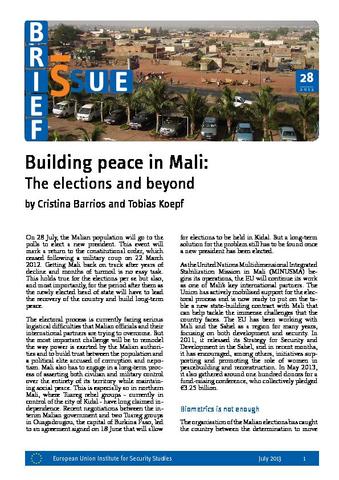 On 28 July, the Malian population will go to the polls to elect a new president. This event will mark a return to the constitutional order, which ceased following a military coup on 22 March 2012. Getting Mali back on track after years of decline and months of turmoil is no easy task. This holds true for the elections per se but also, and most importantly, for the period after them as the newly elected head of state will have to lead the recovery of the country and build long-term peace. The electoral process is currently facing serious logistical difficulties that Malian officials and their international partners are trying to overcome. But the most important challenge will be to remodel the way power is exerted by the Malian authorities and to build trust between the population and a political elite accused of corruption and nepotism. Mali also has to engage in a long-term process of asserting both civilian and military control over the entirety of its territory while maintaining social peace. This is especially so in northern Mali, where Tuareg rebel groups - currently control the city of Kidal - have long claimed independence. Recent negotiations between the interim Malian government and two Tuareg groups in Ouagadougou, the capital of Burkina Faso, led to an agreement signed on 18 June that will allow for elections to be held in Kidal. But a long-term solution for the problem still has to be found once a new president has been elected.

Terrorist attacks in Niger: not another Mali