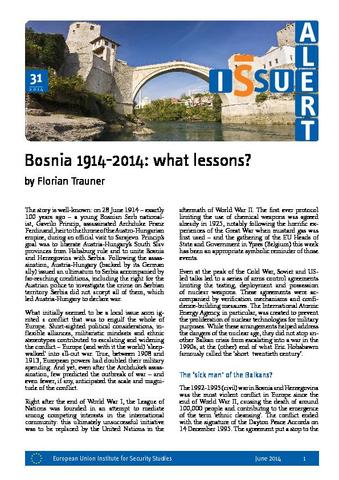 The story is well-known: on 28 June 1914 – ­exactly 100 years ago – a young Bosnian Serb nationalist, Gavrilo Princip, assassinated Archduke Franz Ferdinand, heir to the throne of the Austro-Hungarian empire, during an official visit to Sarajevo. Princip’s goal was to liberate Austria-Hungary’s South Slav provinces from Habsburg rule and to unite Bosnia and Herzegovina with Serbia. Following the assassination, Austria-Hungary (backed by its German ally) issued an ultimatum to Serbia accompanied by far-reaching conditions, including the right for the Austrian police to investigate the crime on Serbian territory. Serbia did not accept all of them, which led Austria-Hungary to declare war.
What initially seemed to be a local issue soon ignited a conflict that was to engulf the whole of Europe. Short-sighted political considerations, inflexible alliances, militaristic mindsets and ethnic stereotypes contributed to escalating and widening the conflict – Europe (and with it the world) ‘sleepwalked’ into all-out war. True, between 1908 and 1913, European powers had doubled their military spending. And yet, even after the Archduke’s assassination, few predicted the outbreak of war – and even fewer, if any, anticipated the scale and magnitude of the conflict.