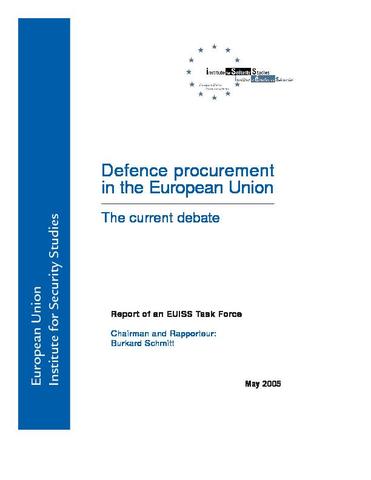 In September 2004, the European Commission issued a Green Paper on defence procurement, proposing various options to improve transparency and openness of defence markets between EU member states. The Green Paper opened a discussion on procurement law which rapidly widened into a general debate on how to move towards a common Defence Equipment Market.
The starting point of the debate is the use of Art. 296 TEC, which gives member states the possibility to derogate from the rules of the Internal Market for the procurement of arms, munitions and war material. Although this exemption is subject to certain conditions, most governments have interpreted Art. 296 as a blank cheque, excluding defence procurement almost completely from Community rules. This practice has led to inefficient market fragmentation and a lack of intra-European competition. <br />The Green Paper identifies two options for action to improve the situation: an Interpretative Communication, which would specify the conditions governing the use of Art. 296 on the basis of existing Community law; and a new Directive adapted to the specificities of defence for procurement contracts which are not covered by Art. 296 but for which the civil Directive may be ill-suited. In addition, member states tasked the European Defence Agency to explore possibilities of a Code of Conduct to foster competition within the scope of Art. 296. By the end of 2005, both the Commission and member states will decide on how to proceed and which elements to develop.
Given the importance of these issues the EUISS established a Task Force to assess the various options for action. The present report is the fruit of that work. It concludes that Communication, Directive and Code are not alternatives to one another, but complementary. It therefore recommends that all three of them should be developed concurrently. In order to optimise their effectiveness, the Commission and the Defence Agency should work out solutions in related areas. All of these initiatives should be launched in parallel as part of a comprehensive strategy for the establishment of a common European Defence Equipment Market.

The European Union and armaments: getting a bigger bang for the Euro