Belarus: time for a 'principled' re-engagement 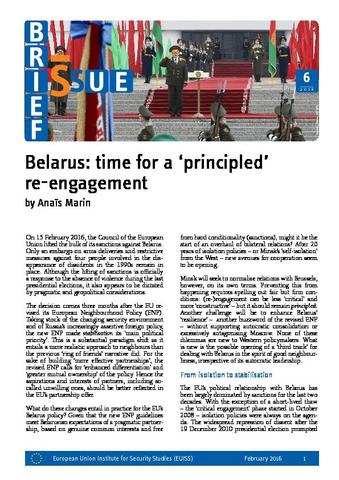 On 15 February 2016, the Council of the European Union lifted the bulk of its sanctions against Belarus. Only an embargo on arms deliveries and restrictive measures against four people involved in the disappearance of dissidents in the 1990s remain in place. Although the lifting of sanctions is officially a response to the absence of violence during the last presidential elections, it also appears to be dictated by pragmatic and geopolitical considerations. The decision comes three months after the EU revised its European Neighbourhood Policy (ENP). Taking stock of the changing security environment and of Russia’s increasingly assertive foreign policy, the new ENP made stabilisation its ‘main political priority’. This is a substantial paradigm shift as it entails a more realistic approach to neighbours than the previous ‘ring of friends’ narrative did. For the sake of building ‘more effective partnerships’, the revised ENP calls for ‘enhanced differentiation’ and ‘greater mutual ownership’ of the policy. Hence the aspirations and interests of partners, including so called unwilling ones, should be better reflected in the EU’s partnership offer.