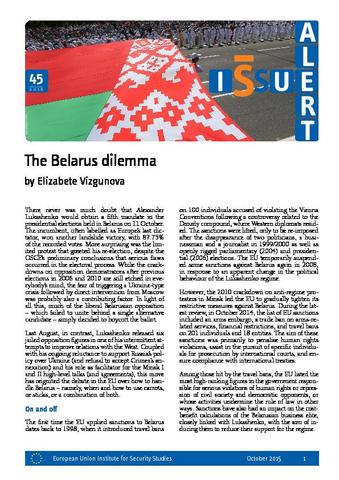 There never was much doubt that Alexander Lukashenko would obtain a fifth mandate in the presidential elections held in Belarus on 11 October. The incumbent, often labelled as Europe’s last dictator, won another landslide victory, with 87.75% of the recorded votes. More surprising was the limited protest that greeted his re-election, despite the OSCE’s preliminary conclusions that serious flaws occurred in the electoral process. While the crackdowns on opposition demonstrators after previous elections in 2006 and 2010 are still etched in everybody’s mind, the fear of triggering a Ukraine-type crisis followed by direct intervention from Moscow was probably also a contributing factor. In light of all this, much of the liberal Belarusian opposition – which failed to unite behind a single alternative candidate – simply decided to boycott the ballot.