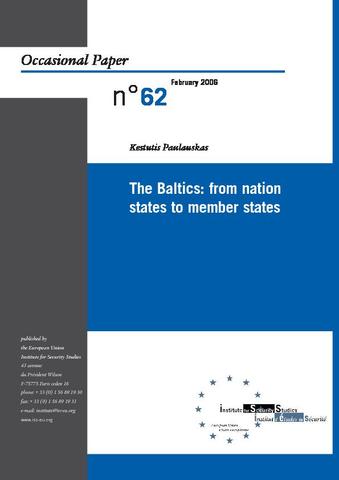 In 2004, Estonia, Latvia and Lithuania finally attained their long-standing strategic goals and became members of both the European Union and NATO. This paper discusses the opportunities and challenges the Baltic governments face after their nation states became member states.
In the first section of the paper, the author argues that the era of ‘high politics’ in the ever-complicated saga of Baltic-Russian relations is over. However, it appears likely that tensions will persist in ‘low politics’ and the issues of the Russian minorities in Latvia and Estonia, transit to the Kaliningrad region, and Russian energy policy top the agenda. In the second section, the author contends that the importance and relevance of different regional cooperation frameworks, in which the Baltic States were actively engaged prior to the double enlargement, is changing. The Baltic governments are well placed to make a positive impact on the European Neighbourhood Policy. The third section of the paper explores the reasons behind the pro-American sentiments of the Baltic political elites, while maintaining that they have (misguidedly) paid too little attention to the development of CFSP. The author makes the case that a stronger EU security and defence role is very much in the interest of the Baltic States.
The paper concludes with an analysis of policy implications for the Baltic governments. The author maintains that the Baltic States need to become pragmatic in their daily business with Russia and more flexible within the EU about their policies towards Russia, while at the same time remaining assertive with regard to their long-term interest in seeing Russia become a normal democracy. The author highlights the need for the Baltic governments to prioritise among the plethora of organisations in the Baltic Sea region by strengthening ties with the Nordic capitals and suggesting ways to ‘make a difference’ in the Eastern neighbourhood. Finally, the author exhorts Riga, Tallinn and Vilnius to reappraise their approach towards CFSP and ESDP, to internalise the EU in their strategic thinking and to become normal and credible member states instead of ‘special cases’.

The Baltic States: security and defence after independence