The Baltic States: security and defence after independence 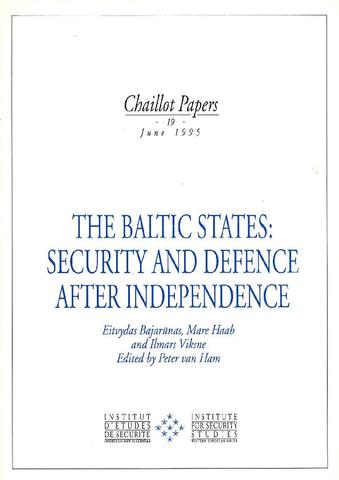 Since the dissolution of the Soviet Union in 1991, the three Baltic states -- Latvia, Lithuania and Estonia -- have made significant strides in consolidating their independence, putting themselves not only on the geographical map of Europe, but also on the mental map of Western policy-makers. In retrospect, the period in which the Baltic states recaptured their sovereignty from Moscow was astonishingly brief: in barely two years, and without widespread conflict or great loss of life, these states shed the status of Soviet Republic and accomplished full independence. Although the Baltic states have made much progress in reorienting their economies towards the West and developing a comprehensive foreign and security policy, they still face the reality that, for geographical and historical reasons, their role and place in Europe is uncertain.

In this Chaillot Paper, scholars from Estonia, Latvia and Lithuania examine in detail the problems their countries face in forming their security and defence policies. The authors analyse the main security challenges facing the Baltic republics, as well as the ways in which they have organized their defence forces. Inevitably, much attention is paid to relations with the West and Western institutions, as well as the residual threat which Russia still poses and the possibilities offered by cooperation among the Baltic and Nordic states in addressing regional security challenges.