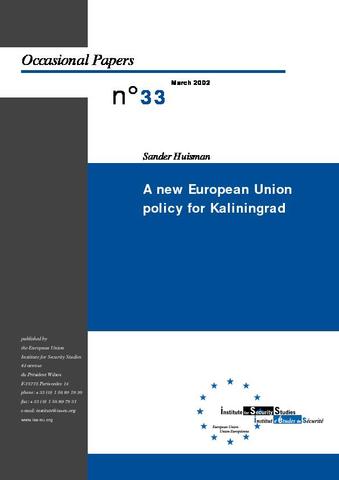 Just as Königsberg became known for its intellectual weight, symbolised by the brain-twister how to cross the city's seven bridges without passing one of them twice; Kaliningrad is notorious for the immense problems it has to deal with, perhaps mirrored by the inconclusive ways the EU and the Kremlin are figuring out how to assist the oblast. Any government would get frightened if faced with a task of the daunting magnitude that Kaliningrad's governor Yegorov and his administration face. The exclave is cut off from mainland Russia by Lithuania and Poland. The oblast's officials have to cope with the highest percentage of HIV infections in Europe and with an intimidating scale of several manifestations of organised crime. Large outdated industries face structural collapse, resulting in high unemployment rates. A third of Kaliningrad's one million inhabitants live below the poverty line. The oblast's environmental legacy poses threats to the whole Baltic Sea region. The fundamental concern is that Kaliningrad does not play a role of any significance in the region. Trade patterns are diverted away from the oblast, and the main transport routes bypass the exclave. Neighbouring countries have developed far more competitive economies.

For a long time Russia's leadership did not know how to relieve its exclave, and instead adopted some creative initiatives. First of all, a Free Economic Zone (later a Special Economic Zone) was established, which was to attract foreign investment by providing tax incentives. Secondly, the Kaliningrad administration was granted considerable powers by which it could shape its own policies. Neither initiative paid off, and Kaliningrad drifted further towards decay.

The EU also had no idea concerning the Russian exclave, and at first even neglected it. Urged by the accession negotiations of Lithuania and Poland for EU membership, Brussels saw that it simply had to devise 'something' by way of a policy towards Kaliningrad, as the oblast would one day be a Russian enclave within EU territory. Whereas Vilnius and Warsaw quickly established several forums for cooperation with the oblast, opened consulates in Kaliningrad and ran several projects on economic and environmental cooperation, the EU seemingly remained oblivious to it. Both its Partnership and Co-operation Agreement with Russia and its Common Strategy on Russia (CSR) provide only very weak linkages in its dealings with Kaliningrad.

In addition, the conflicting internal and external policies of the EU hinder a constructive approach towards Kaliningrad, as the former aims to make the future EU border as strong and well guarded as possible, whilst the latter wants to engage the 'outsiders' through cross-border cooperative projects. Only after the development of the Northern Dimension in 1999 did the EU seem willing to approach Kaliningrad from a different and more flexible perspective, also involving the Russian government in this respect.

The creation of the ND Action Plan has given Kaliningrad priority status, and Lithuania (together with Russia) presented a very comprehensive package of proposals that could concretely counter the oblast's isolation. However, funding is still lacking. Presumably due to its lack of expertise and knowledge of Kaliningrad, the European Commission did not provide any suggestions for improvement at that time. All this changed when Sweden took over the presidency of the EU in the first half of 2001. The EC presented its communication on Kaliningrad to the Council, which highlighted the areas where both the EU and Russia need to take action. A Tacis local support office was opened in the oblast, and the EC considered extending Phare aid (in addition to Tacis) to Kaliningrad for specific areas.

At the same time, things were looking brighter in the oblast itself as the new governor Yegorov took over. He is widely regarded as a pro-European and reform-minded pragmatist, and has a good relationship with Putin. In Moscow a new federal programme on Kaliningrad has been adopted, envisaging a grand design for reconstruction of the oblast. Furthermore, Putin convened a special Security Council meeting on the exclave, where he set out a critical analysis of the main shortcomings of the policies of the last years (lack of coordination among ministries, low effectiveness of work and an absence of suitable legal and administrative frameworks). For the last two years the President has also been stressing the need to make Kaliningrad a pilot region in the framework of the EU-Russia relationship.

However, both the new federal programme and the words of Putin conceal or neglect more fundamental issues. The programme seems to be based on an incorrect analysis of the oblast's problems (it is not trying to deal with the issues that Putin addressed). The President, on the other hand, has been successful in putting his appointees and favourites (e.g. Yegorov) into the right places, but he has failed to tackle difficult reforms and to make systematic changes. These will be harder to accomplish, not least because they could weaken Putin's control as well. Whereas the EU operates through its institutions, Russia is governed by personalities.

But with Putin and Yegorov firmly at the head of their administrations, there at least seems to be long-term continuity in policy implementation. And even though the new federal programme has its fundamental flaws, it shows commitment. What Russia now needs to do is to give sufficient leeway to Kaliningrad in order to improve its administration. Moscow should also set up a governmental or presidential commission on Kaliningrad, in which all relevant ministries and the oblast's administration take part, which has to develop a better strategy (based on Putin's criticism and suggestions made at the Security Council) towards the exclave than the newly adopted federal programme. The Kremlin also has to implement clear legislation that takes the interests of foreign investors into account. Only by establishing stability and predictability will the SEZ have a chance to become successful, and foreign money find its way to Kaliningrad.

The EU has a lot to improve upon as well. First of all it needs to find ways to make the overlapping areas of its internal and external policies more coherent, as extension of the Schengen acquis to the applicant countries clearly obstructs the development of regional economic cooperation and trade. Secondly it has to coordinate its aid programmes (Tacis, Phare and Interreg) to increase the efficiency of financial support and to enlarge the possibilities of cross-border projects. Third, Brussels has to bring consistency into the PCA, CSR and ND when it is dealing with Kaliningrad, as the current frameworks are too loose to be effective. Fourth, the EU has to increase the involvement of Lithuania, Poland and the CBSS to increase the regional expertise in the making and find solutions for Kaliningrad after EU enlargement. It has to allow greater participation of the oblast's officials in these discussions as well.

The EU should seriously consider creating a Common Strategy for Kaliningrad, one that is different from the 'old' and ineffective CSR. It would be easier to implement than the CSR, as Kaliningrad is small and thus manageable, and currently none of the EU member states has a specific policy towards the oblast. It would also be sensible as the oblast will be surrounded by EU territory after 2004. Most importantly, it would allow a coherent cross-pillar, targeted approach, which Javier Solana would like Common Strategies to be.

The year 2001 witnessed a new engagement with Kaliningrad, both from the EU and Russia. Even though Brussels' commitment will be periodic (due to the rotating presidency), the actions undertaken give reason to be moderately optimistic. And whereas the new federal programme is based on an incorrect appreciation of the real obstacles to growth, the Kremlin is willing to launch new initiatives. So, finally, there seems to be light at the end of the tunnel for Kaliningrad. But whether it is going to be candlelight or a halo depends on crucial improvements that cannot be neglected. Moscow holds the key, but Brussels must give a helping hand to enable the Russians to unlock the gate.