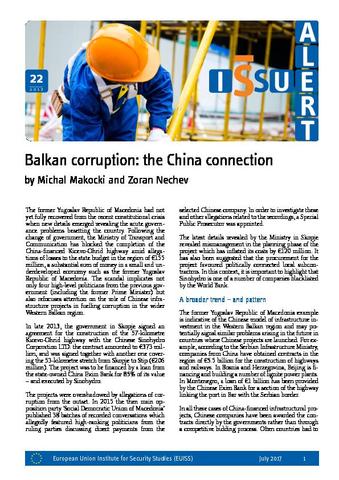 The former Yugoslav Republic of Macedonia had not yet fully recovered from the recent constitutional crisis when new details emerged revealing the acute governance problems besetting the country. Following the change of government, the Ministry of Transport and Communication has blocked the completion of the China-financed Kicevo-Ohrid highway amid allegations of losses to the state budget in the region of €155 million, a substantial sum of money in a small and underdeveloped economy such as the former Yugoslav Republic of Macedonia.

The scandal implicates not only four high-level politicians from the previous government (including the former Prime Minister) but also refocuses attention on the role of Chinese infrastructure projects in fuelling corruption in the wider Western Balkan region.