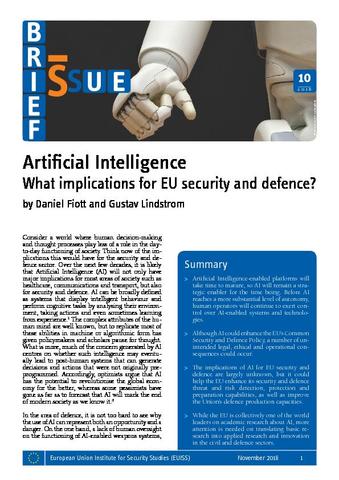 Consider a world where human decision-making and thought processes play less of a role in the day-to-day functioning of society. Think now of the implications this would have for the security and defence sector. Over the next few decades, it is likely that Artificial Intelligence (AI) will not only have major implications for most areas of society such as healthcare, communications and transport, but also for security and defence. AI can be broadly defined as systems that display intelligent behaviour and perform cognitive tasks by analysing their environment, taking actions and even sometimes learning from experience.

The complex attributes of the human mind are well known, but to replicate most of these abilities in machine or algorithmic form has given policymakers and scholars pause for thought. What is more, much of the concern generated by AI centres on whether such intelligence may eventually lead to post-human systems that can generate decisions and actions that were not originally pre-programmed. Accordingly, optimists argue that AI has the potential to revolutionise the global economy for the better, whereas some pessimists have gone as far as to forecast that AI will mark the end of modern society as we know it.