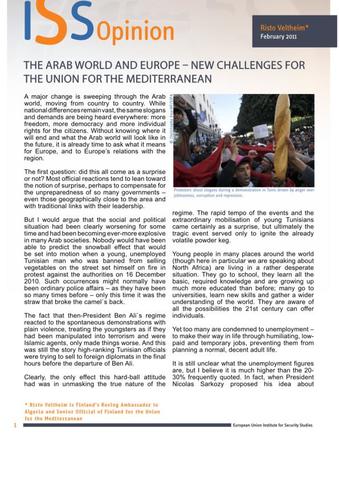 A major change is sweeping through the Arab world, moving from country to country. While national differences remain vast, the same slogans and demands are being heard everywhere: more freedom, more democracy and more individual rights for the citizens. Without knowing where it will end and what the Arab world will look like in the future, it is already time to ask what it means for Europe, and to Europe’s relations with the region.

The Union for the Mediterranean - largely conceived to inject investment into North Africa - has been hindered by unexpected political obstacles and its building-up has remained way behind schedule. In fact, the political dimension of the UfM has been constantly paralysed by the deadlock in the Middle East Peace Process. If the Peace Process in the Middle East is not back on track soon, the construction of the Union for the Mediterranean, with all the high-level expectations it created in 2008, will be skating on a thin ice.