Along the Road – China in the Arctic 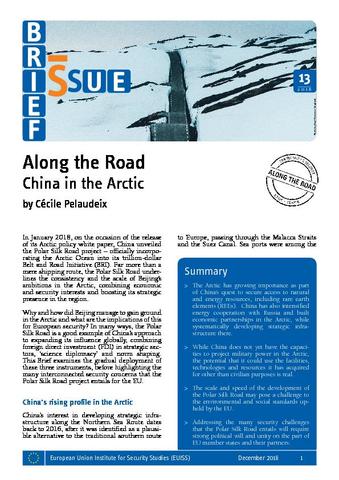 This Brief focuses on China’s Polar Silk Road project, which officially incorporates the Arctic Ocean into Beijing’s Belt and Road Initiative, and examines what it reveals about China’s broader geopolitical ambitions in the region. The Arctic has growing importance as part of China’s quest to secure access to natural and energy resources, including highly prized rare earth elements, of which Greenland contains extensive deposits; furthermore, China is actively developing strategic infrastructure in the Arctic.

China’s expansion in the Arctic clearly has implications for European security, as it involves many strategic sectors, including energy, space observation and defence. While China does not yet have the capacities to project military power in the Arctic, the possibility that it could use the facilities, technologies and resources it has acquired for other than civilian purposes cannot be ignored. Addressing the many security challenges that the Polar Silk Road project entails will require strong political will and unity on the part of EU member states and their partners.

Along the road – Gwadar and China’s power projection