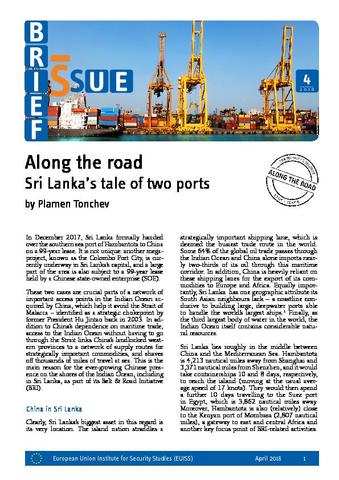 In December 2017, Sri Lanka formally handed over the southern sea port of Hambantota to China on a 99-year lease. It is not unique: another megaproject, known as the Colombo Port City, is currently underway in Sri Lanka’s capital, and a large part of the area is also subject to a 99-year lease held by a Chinese state-owned enterprise (SOE).

These two cases are crucial parts of a network of important access points in the Indian Ocean acquired by China, which help it avoid the Strait of Malacca – identified as a strategic chokepoint by former President Hu Jintao back in 2003. In addition to China’s dependence on maritime trade, access to the Indian Ocean without having to go through the Strait links China’s landlocked western provinces to a network of supply routes for strategically important commodities, and shaves off thousands of miles of travel at sea. This is the main reason for the ever-growing Chinese presence on the shores of the Indian Ocean, including in Sri Lanka, as part of its Belt & Road Initiative (BRI).

This Brief is the first publication in the EUISS series ‘Along the road’, which will examine the security implications of China’s BRI. Through a collection of case studies from infrastructure projects and countries situated 'along the road', this series will seek to gather concrete evidence of the success or failure of Beijing’s new geopolitical project.