Ukraine: the view from China 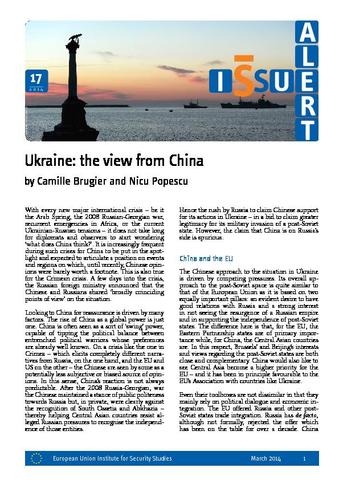 With every new major international crisis, it does not take long for diplomats and observers to start wondering ‘what does China think?’. This is also true for the Crimean crisis. A few days into the crisis, the Russian foreign ministry announced that the Chinese and Russians shared ‘broadly coinciding points of view’ on the situation. Looking to China for reassurance is driven by many factors. The rise of China as a global power is just one. China is often seen as a sort of ‘swing’ power, capable of tipping the political balance between entrenched political warriors whose preferences are already well known. In this sense, China’s reaction is not always predictable. After the 2008 Russia-Georgian, war the Chinese maintained a stance of public politeness towards Russia but, in private, were clearly against the recognition of South Ossetia and Abkhazia – thereby helping Central Asian countries resist alleged Russian pressures to recognise the independence of those entities. Hence the rush by Russia to claim Chinese support for its actions in Ukraine – in a bid to claim greater legitimacy for its military invasion of a post-Soviet state. However, the claim that China is on Russia’s side is spurious.