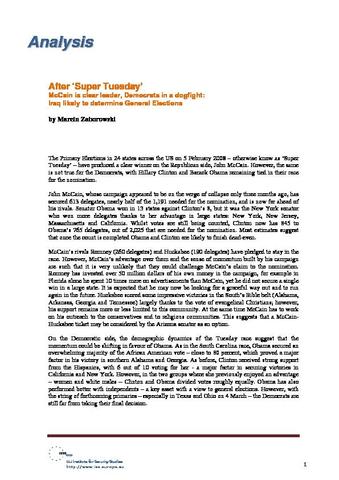 <p style="TEXT-ALIGN: justify">The Primary Elections in 24 states across the US on 5 February 2008 – otherwise know as ‘Super Tuesday’ – have produced a clear winner on the Republican side, John McCain. However, the same is not true for the Democrats, with Hillary Clinton and Barack Obama remaining tied in their race for the nomination. <br /><br />John McCain, whose campaign appeared to be on the verge of collapse only three months ago, has secured 613 delegates, nearly half of the 1,191 needed for the nomination, and is now far ahead of his rivals. Senator Obama won in 13 states against Clinton’s 8, but it was the New York senator who won more delegates thanks to her advantage in large states: New York, New Jersey, Massachusetts and California. Whilst votes are still being counted, Clinton now has 845 to Obama’s 765 delegates, out of 2,025 that are needed for the nomination. Most estimates suggest that once the count is completed Obama and Clinton are likely to finish dead-even. </p>