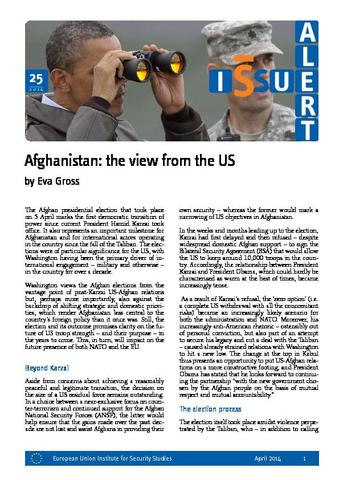 The Afghan presidential election that took place on 5 April marks the first democratic transition of power since current President Hamid Karzai took office. It also represents an important milestone for Afghanistan and for international actors operating in the country since the fall of the Taliban. The elections were of particular significance for the US, with Washington having been the primary driver of international engagement – military and otherwise – in the country for over a decade. Washington views the Afghan elections from the vantage point of post-Karzai US-Afghan relations but, perhaps more importantly, also against the backdrop of shifting strategic and domestic priorities, which renders Afghanistan less central to the country´s foreign policy than it once was. Still, the election and its outcome promises clarity on the future of US troop strength – and their purpose – in the years to come. This, in turn, will determine the future presence of both NATO and the EU as well.

Afghanistan: the view from Pakistan