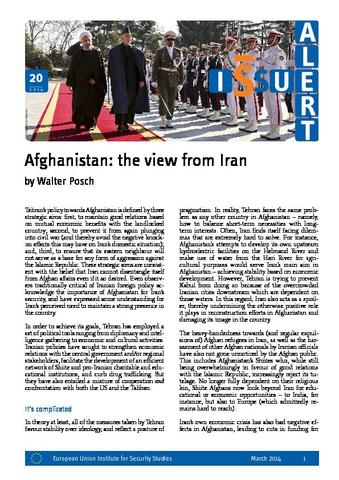 Tehran’s policy towards Afghanistan is defined by three strategic aims: first, to maintain good relations based on mutual economic benefits with the landlocked country; second, to prevent it from again plunging into civil war (and thereby avoid the negative knock-on effects this may have on Iran’s domestic situation); and, third, to ensure that its eastern neighbour will not serve as a base for any form of aggression against the Islamic Republic. These strategic aims are consistent with the belief that Iran cannot disentangle itself from Afghan affairs even if it so desired. Even observers traditionally critical of Iranian foreign policy acknowledge the importance of Afghanistan for Iran’s security, and have expressed some understanding for Iran’s perceived need to maintain a strong presence in the country. In order to achieve its goals, Tehran has employed a set of political tools ranging from diplomacy and intelligence gathering to economic and cultural activities. Iranian policies have sought to strengthen economic relations with the central government and/or regional stakeholders, facilitate the development of an efficient network of Shiite and pro-Iranian charitable and educational institutions, and curb drug trafficking. But they have also entailed a mixture of cooperation and confrontation with both the US and the Taliban.