Afghanistan: the view from Russia 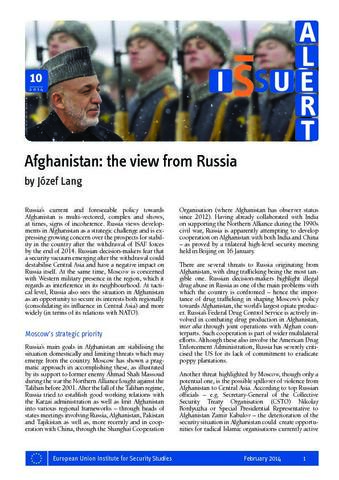 Russia’s current and foreseeable policy towards Afghanistan is multi-vectored, complex and shows, at times, signs of incoherence. Russia views developments in Afghanistan as a strategic challenge and is expressing growing concern over the country’s prospects for stability after the withdrawal of ISAF forces by the end of 2014. Russian decision-makers fear that a security vacuum emerging after the withdrawal could destabilise Central Asia and have a negative impact on Russia itself. At the same time, Moscow is concerned with Western military presence in the region, which it regards as interference in its neighbourhood. At tactical level, Russia also sees the situation in Afghanistan as an opportunity to secure its interests both regionally (consolidating its influence in Central Asia) and more widely (in terms of its relations with NATO).