Afghanistan: the crisis after the elections 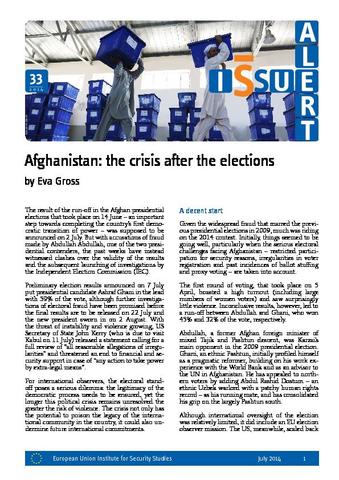 The result of the run-off in the Afghan presidential elections that took place on 14 June – an important step towards completing the country’s first democratic transition of power – was supposed to be announced on 2 July. But with accusations of fraud made by Abdullah Abdullah, one of the two presidential contenders, the past weeks have instead witnessed clashes over the validity of the results and the subsequent launching of investigations by the Independent Election Commission (IEC). Preliminary election results announced on 7 July put presidential candidate Ashraf Ghani in the lead with 59% of the vote, although further investigations of electoral fraud have been promised before the final results are to be released on 22 July and the new president sworn in on 2 August. With the threat of instability and violence growing, US Secretary of State John Kerry (who is due to visit Kabul on 11 July) released a statement calling for a full review of “all reasonable allegations of irregularities” and threatened an end to financial and security support in case of “any action to take power by extra-legal means”.