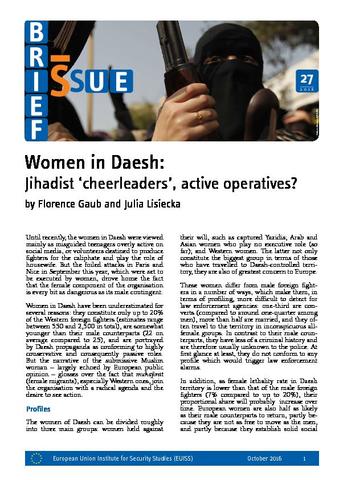 Until recently, the women in Daesh were viewed mainly as misguided teenagers overly active on social media, or volunteers destined to produce fighters for the caliphate and play the role of housewife. But the foiled attacks in Paris and Nice in September this year, which were set to be executed by women, drove home the fact that the female component of the organisation is every bit as dangerous as its male contingent. Women in Daesh have been underestimated for several reasons: they constitute only up to 20% of the Western foreign fighters (estimates range between 550 and 2,500 in total), are somewhat younger than their male counterparts (22 on average compared to 25), and are portrayed by Daesh propaganda as conforming to highly conservative and consequently passive roles. But the narrative of the submissive Muslim woman – largely echoed by European public opinion – glosses over the fact that muhajirat (female migrants), especially Western ones, join the organisation with a radical agenda and the desire to see action.